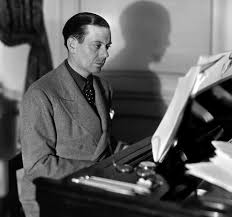 The Harris/Roane Duo, featuring vocalist Julie Harris and guitarist Stephen Roane, will perform An Afternoon with Cole Porter. The fascinating life of Cole Porter, the great American composer, is set to his unforgettable music. His story is filled with memorable characters such as Fred Astaire, Ethel Merman, Irving Berlin...against the background of such tunes as "Night and Day", "Begin the Beguine", "Delovely" and more!

Guilford resident Julie Harris began her professional singing career in her hometown, Kansas City, Missouri. In 2008 she joined forces with Stephen Roane to form the Harris/Roane Duo. Roane is an accomplished jazz guitarist and bassist based in Madison. This will be the Duo's debut performance at the Woodbridge Town Library after appearing in many concerts at area libraries, such as the Guilford Free Library, the New Haven Library, and the Scranton Library in Madison.

This concert is graciously sponsored by the Gerry Hellmann Eckhardt Fund for the Woodbridge Library, an endowed designated fund at the Valley Community Foundation. The Fund enables the Library to host an annual concert celebrating the arts; learn more about it here.